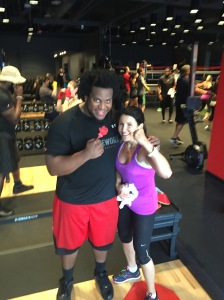 Thanks Trainer Karl for a great workout.

I don’t want to say I’m back, but I am feeling inspired. With the kid at sleep away camp (and having a blast) I find myself with more free time than usual. This week I took full advantage of the fact that I didn’t have to be home by a specific time or pay a sitter. We tried two new restaurants (well new to us) and I went not once but twice to a relatively new gym in Santa Monica, Gloveworx.

I first learned about Gloveworx from my friend Christina Malizia, a top fitness trainer and co-founder of CHILLBYWILL. Christina knows I love to try new things and that I’m alway up for a challenge. She said I would love Gloveworx and she was right. My first class was on Wednesday night. I went with three of my work peeps to a BOOM class. When I first arrived I felt a bit intimidated. There was a class going on and these people were working hard – sweaty hard. Class started and we were introduced to our instructor Karl. We started with a brief warm up on a spin bike. From there the 5 of us went over to the turf and were instructed on the proper stance and taught how to do a 1-2-3 combination. 3 of us were then brought into the ring. Our hands were wrapped and we picked out a pair of gloves (they supply wraps and gloves if you don’t have your own). I put on some awesome pink gloves and was ready to go. I had gone to a boxing gym in downtown San Diego the summer before I started college and loved it. Though it had been years, maybe even decades since I had gloves on I was energized and ready to go. There is something about standing in a ring that makes you feel tough! We spent about 5 minutes in the ring with Karl. He’d alternate between the three of us and work with us on our technique. From the ring we went to the turf where another trainer led us in a series of ab/core exercises. These were no joke. We then got on rowers and I became breathless trying to get below 1:55 on the rower (not sure I know what that means but it was hard). We repeated the ring, turf, cardio two more times. Our time on the turf got even more difficult (plank, squats, jump squats, high knees) and the final cardio session was on a Versa Climber. Wow maybe all the treadmill running wasn’t doing as much as I thought. Class flew by and left me drenched, just how I like it.
I came home super pumped and began plotting my next visit. I recruited my regular workout buddy and another friend to go Friday (yesterday) at 6:30am. Again we did another Boom class. This class was with Leyon, one of the Co-Founders. In this class we followed a similar format with the addition of time on a heavy bag. Can we talk about how fun it is to try and whack the sh%$ out of a heavy bag. Not only is it fun and therapeutic but this morning the back of my arms and my entire back are sore (that’s a good thing).
Gloveworx is located in Santa Monica on Wilshire between 15th and 14th. The first class is free. Go check it out and tell me what you think.